For the last year it has been my goal to get our dogs DNA tested here at FleuryDachs.  There are a lot of good reasons to do so (including accuracy in color as well as moving forward to breed certain colors) but for us, the reason we moved forward with this expense was in order to ensure the betterment of the breed.  As a new breeder, it was always my goal to preserve the Dachshund breed that I had fallen in love with, but there was so much I didn’t know and even more that I will continue to learn about.

I am not a fan of the snobbery that can be common in any breeding industry and have always stood firm in my belief that we all should do the best we are capable of and treat others with respect and courtesy.  Of course we all have things that are a priority and any good breeder will always worry about the integrity of the breed.  But to some breeders, that means only colors and patterns that are accepted in the show ring.  For others, that means colors that won’t pass along a chance for health issues.  But for all quality breeders, that should mean HEALTHY puppies with the best chance of not inheriting anything that can compromise their health and happiness.

When I originally sent off my first order for Dachshund DNA testing kits from Optimal Selection, I figured I would test the majority of the dogs but not worry about the dogs that only have a couple litters left before retirement.  I knew the other two girls didn’t carry dilute and I knew what I could expect color wise for their puppies and I was hoping to save a few hundred dollars!  After some of the results started to come in, I decided I was going to just bite the bullet and spend the money to test all of my dogs.  You see, some of my dogs from reputable breeders came back as carriers for the cone rod dystrophy gene (PRA).  While this isn’t a big deal, this meant that I absolutely do not want to be breeding a carrier to a carrier and have a 25% chance of affected puppies!  (Disclaimer: not all affected dogs will have problems.  There is belief that it requires an “activator” gene in order for them to have vision problems.)  Additionally, I wanted to make absolutely certain that I wasn’t unintentionally breeding a carrier to an affected dog! 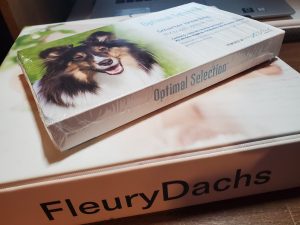 It was completely disheartening to see that not all of my dogs were clear of everything.  It’s very easy to fall into the “but if I never tested, then what I didn’t know wouldn’t hurt me” mindset, but that is NOT how I want to run my business!  I want to know that my pups are going to forever homes that will not have to worry about things that are preventable on my end!  And I want any potential buyer to know that as well!  I am still waiting on the dilute testing (it went to PawPrint Genetics) to make sure that I am not breeding dilute to dilute and breeding dilute puppies.  They are so beautiful and I absolutely love the blue, but I don’t want to intentionally breed a dog that could wind up with skin alopecia (CDA) when it is something I can avoid for sure.  I know breeders who breed them and I am happy to refer people who are making an educated choice before buying the beautiful dilute colors.

I have had to make some changes in future breedings, but I am SO grateful that I took the plunge and spent the extra money to make sure that Dachshund DNA testing could improve my business!  Ammo will not be available to stud outside dogs unless they have already been DNA tested and are PRA clear.  He also carries a dilute gene and is not available at all in breeding dilute.  I had hoped to carry on his line, however, I will not do so without DNA testing any potential breeding puppy first.  Rosie will not be bred with Ammo but will instead be making a trip to Billings for an available stud who is PRA clear until I have verified her D allele and the PRA of my other non dapple males.  Remi is not a dapple and will be bred to Titan (who is clear for everything) for her next breeding!  She does not carry piebald either but we can hope to see black and tan dapples as well as reds.  As I move forward, I will not be buying dogs unless I know that their parents have had Dachshund DNA testing.  I will continue to test every pup I intend to use for breeding, no longer will I be waiting with baited breath about the possibility of them being affected.  It is a risk that I will not take nor will I ever again expect my buyers to take!