breeding dachshunds: A journey in learning

I only made the decision to make FleuryDachs a thing a couple years ago.  I haven’t had much experience breeding Dachshunds although I grew up in a home with parents who bred Chesapeake Bay Retrievers and then later West Highland White Terriers.  I bred Siberian Huskies over 20 years ago.  I have had to learn a LOT about breeding not just because going from big dogs to little dogs is such a big change, but also because I wanted to be sure that my pups were getting their best lives and people were getting my best efforts.

When people ask me about breeding Dachshunds, I always tell them that breeding is a personal decision and not one that should be made lightly.  Some breeders will go a dozen litters with nothing awful to deal with, but that is not something you should count on.  You need to be ready for anything and always learning.  And more importantly, you need to accept the responsibility that these puppies did not ask to be brought into this world.  You made that choice for them so therefore it is up to you to do everything you can for them to have their best lives.

Powder delivered her third litter on Monday, Oct 7.  I noticed Sunday that she was acting unusual and was choosing to spend the majority of her time away from my daughter (and her girl) and instead, in her daughter’s (Rosie’s) kennel and bed!  I took her to bed with me that night after checking for (and not finding) a temperature drop, and she kept me up all night pacing, nesting, and carrying on.  The next morning I woke up my daughter with the news that Powder was in the beginning stages of labor and I was pretty sure we were going to have puppies that day.  Sure enough, around noon, Powder delivered her first puppy.  Over the next couple hours, she delivered the three expected puppies all from a breech position.  She retained a placenta with the last puppy, so after 3 hours of not delivering it, we went to the vet for a shot to help her pass it.  She passed it later that night and we settled in. 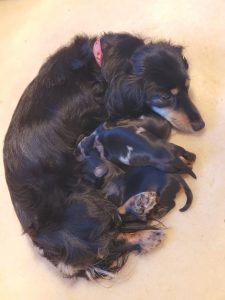 Over the next 5 days, I noticed Powder’s milk wasn’t as heavy as normal so I was extra watchful to make sure pups were continuing to gain and thrive.  On Saturday, my vet tech arrived to remove dewclaws and brought with her a bag of Lactated Ringers (IV fluids) so that I would have one on hand should I need one in an emergency for dehydrated pups or dogs.  Powder came out to greet her and she looked Powder over and commented on how well she seemed to be doing and noticed that her milk was starting to come in better.  Powder ate a can and a half of puppy food that day and remained active.  Saturday night, before bed, I felt the overwhelming urge to check on her and the pups before going to bed (in spite of my daughter having just been in with her an hour earlier).

Listening to the voice in my head, I made a trip in to check on her and as I rounded the corner, I noticed that she was laying on her side nursing her puppies.  The pups were greedily going to town and as I said her name, I noticed there was no response from Powder.  I got closer and noticed that her eyes were glazed over and not blinking.  I genuinely thought she had died.  I touched her and noticed rapid shallow breathing and still got no response so immediately checked her gums for dehydration.  When I lifted her lip, it did not slide back down over her teeth.  I knew she was severely dehydrated and rushed to set up my bag.  I subq’d her 100 cc of fluids and then went to get my 11 year old to see if she could get a response from her.  When I turned her to check her temperature, I noticed a clear sticky substance under her tail and reassured Kathryn that we were taking her in even if she didn’t have a temp.  A dog’s temperature is usually between 101-103 and hers came in at 104.6.  As I lifted her into a basket with her puppies, it was like moving a dead dog.  Her eyes seemed to be looking at me better, but she wasn’t moving at all.

We rushed the 30 minutes to the vet and along the way, I called them to let them know I was on my way in and gave them all the information I’d gathered including the actions I’d taken.  By the time we got there, Powder was lifting her head and looking around observing the adventure we were on.  By the time the vet examined her, she was giving us kisses and I almost cried with relief.  They did an xray and decided they needed an ultrasound as well.  Part way through the ultrasound, the vet started shaking his head and stated she needed surgery immediately as something had ruptured into her abdomen and it was full of fluid.  They rushed her back and told me that it would probably be 4 hours before I’d hear anything.  They told me the pups would need hand fed even if she made it as she’d be on antibiotics that would endanger them.  I took pups home to start feeding.  Forty five minutes after leaving the hospital, we got a phone call from the vet.  It was the most terrifying ring a phone has ever made.

Relief hit me like a ton of bricks when the vet told me she’d made it through surgery and that she was waking up.  He said that her uterus had ruptured within 24 hours before opening her, and it had filled her abdomen with pus.  “When I opened her up, I didn’t think she was going to survive the surgery.  If you hadn’t done what you did when you did it, she wouldn’t have.  I would even go so far as to say she wouldn’t have survived the drive in,” he informed me.  He flushed out her abdomen and said her intestines pinked back up right away.  He said that it appeared to him as if during delivery, there had been a strain that scratched or tore the uterine wall and that it had caused the infection that then ruptured her uterus.  There was still a chance of complications, but the vet told me he was optimistic about her recovery reiterating that she wouldn’t have made it if I hadn’t been so prepared and stating that I’d saved her life with my quick actions and readiness.

I learned a lot of lessons from my most recent experience in breeding Dachshunds.  I am still learning from it every single day.  We are hand feeding puppies every two hours and we are learning things about that too!  Powder is on the mend and doing well.  She’s struggling emotionally with not being allowed to nurse her puppies but her milk is still in and we’re working to make sure it’ll still be there when she’s cleared to nurse.  Until then, she has accepted her role as butt licker and heating pad.  After this, her sole role from here on out will be that of a companion to my little business partner.

What have I learned?  So glad you asked!

Breeding Dachshunds is not for the faint of heart

There are days when I feel like perhaps I should give up breeding Dachshunds.  There is so much to worry about and so many things that can go wrong.  I follow a breeder group and see posting after posting of all of the worst possible things you can imagine happening to people with their dogs.  The chance of a vacation is about one in a zillion with breeding dogs due to the possibility of a heat or a litter due.  There is no profit in breeding dachshunds for me- every penny I make gets reinvested into the dogs to make sure that I can breed the healthiest puppies with the least amount of stress on us and the dogs.  But I love this breed.  I love seeing families share with me their adventures with their puppies.  My passion is in breeding Dachshunds.  My vet told me that I am the kind of breeder they love working with and he wishes there were more like me.  He told me a half a dozen times that my knowledge and preparation saved her life.  So the next time I’m feeling stressed or frustrated, I’m going to remember this.  I know I’ll lose puppies.  I know that there will be accidental breedings (the #1 reason I won’t have male and female dapples that live together).  But I know that my heart is all the way in this.  And my pocketbook.  lol  And I know that I will always put the health and well being of my dogs ahead of my own.  I am not just breeding Dachshunds; I am making families.