If you own a Dachshund, you are probably very aware of the risk of IVDD.  IVDD is the intervertebral disk disease that Dachshunds are prone to due to their dwarf gene.  While there is a health screen for it, ALL Dachshunds will always test positive for it because they all carry that dwarf gene.  But not all Dachshunds will develop IVDD.  There is some research stating that spay/neuter too early can lead to it but what it ultimately boils down to is injury.  Calcium deposits on the spine certainly make a dog more prone to injury but what can we do to help prevent the risk of injury?

There is only so much we can do because dogs will always be dogs!  Just like children, they are going to push their boundaries and act like knuckleheads and therefore put themselves at more risk.  I always said my Bullet was the most likely to develop IVDD because he would insist on “sitting pretty” and there was no ramp he was using.  He much preferred to launch himself from heights like Superman. 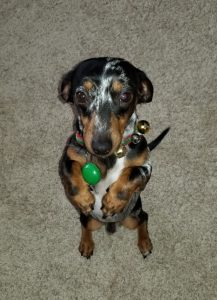 Unfortunately, when I got Bullet, I didn’t have ramps in place so he never learned to use them as routine.  He DID use ramps to get in to my bed but I would frequently see him launch himself from it to get down.  And of course I have dogs that won’t go to the ramp because the shortest path to me is to jump up on the couch.  But after having had ramps for the last couple years, I have noticed that the pups that grew up with ramps in the house use it MUCH more frequently than those who were already here when the ramps appeared.

But do not be fooled!  All Dachshund dog ramps are not the same!!!

The best ramps are exactly that – ramps- not steps!  Steps make the dog jump up each step where a ramp is a gradual increase.  There are some really amazing ramps available but the ramp of choice for our house is the Snoozer brand scalloped ramps!!!  (I am not paid for endorsing them.  I just really love them!)  I once purchased a cheaper knock off brand and was SHOCKED at the difference. 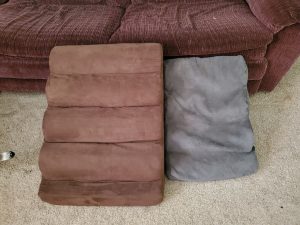 The smaller ramp was approximately $45.  In less than a year, it looked like it does in this photo.  The larger ramp is a medium size Snoozer and was $129 original price.  That’s a HUGE price difference but the larger ramp was over two years old at the time this photo was taken and is now over 3 years old and is in the exact same condition!  Not only that, but the smaller ramp would have foam break apart every time you took the cover off to wash it and put it back on!  It just crumbled apart.  My Snoozer ramp foam is a much better quality foam.  If you buy cheap, you’ll wind up replacing it and ultimately spending more than if you’d just bought quality to begin with.

My dogs love their Dachshund dog ramps and I have one in my camper for the bed, one at my couch in the living room, another at a couch in a second TV room, and one at every bed.  I have them ranging in small to large and it was the best investment I think I could have ever made in helping prevent IVDD.  Does this mean they won’t get it?  Unfortunately, there are no guarantees about that.  But it does help them make better decisions about how to get up and down to where they want to be – next to me!

As I said, I do NOT get endorsed for recommending these ramps but here is the link if you’d like to check them out.  They are occasionally available on Zulily and they do occasionally offer sales on them from Snoozer directly as well.  Here’s to helping our babies stay healthy!